Norwegian Christmas cookies galore: bordstabelbakkels, krumkaker, strull and brune pinner. The last one translates as “brown sticks”, and they are really easy to make. My grandmother always made them and I have her recipe, but they still do not taste quite like hers. Every year my sister and I tweak the recipe to see if we can get closer to what we remember: a dark, crispy cookie with a hint of caramel and a lot of cinnamon. This year I doubled the treacle, which helped the flavour but made the first batch a little soft. Or maybe they were too thick? They need to be very crisp.

We should have seven kinds of Christmas cookies, but socializing is limited this year, and we do have biscotti and IKEA gingerbread cookies too. Plus four (!) different kinds of fruitcake to try, as my friends all have been baking. Now we are exchanging samples and comparing the results. An Australian glutenfree boiled whiskey fruitcake, a Canadian fruitcake, a fruitcake fed with brandy, plus my mother’s fruitcake. All delicious in different ways. But here, a simple cookie.

Note: Modern recipes often use golden syrup but dark syrup (like molasses or treacle) is better for the right flavour. This year I doubled the treacle, which helped the flavour but made the first batch a little soft. Or maybe they were too thick? They need to be very crisp.

Chill the dough for at least a couple hours before baking. Divide the dough into six sausages, and roll them out medium thinly on a baking tray with baking parchment. Too thin, and they are hard to handle, but too thick and they will not be crisp. Brush a stripe of beaten egg down the middle, and sprinkle with a mix of chopped almonds, coconut or pearl sugar.

Bake 10-12 minutes at 170C until baked but not burnt. Last year my notes say 10-20 minutes at 200C, so see what works for you. As soon as they come out, slice each length diagonally with a sharp knife to make individual cookies, and leave to cool before breaking apart. Best to taste-check the ends at once just in case 🙂 as the house will now smell amazing. Store in an airtight box.

You might prefer them with just 1 tbs of light syrup, or less cinnamon. 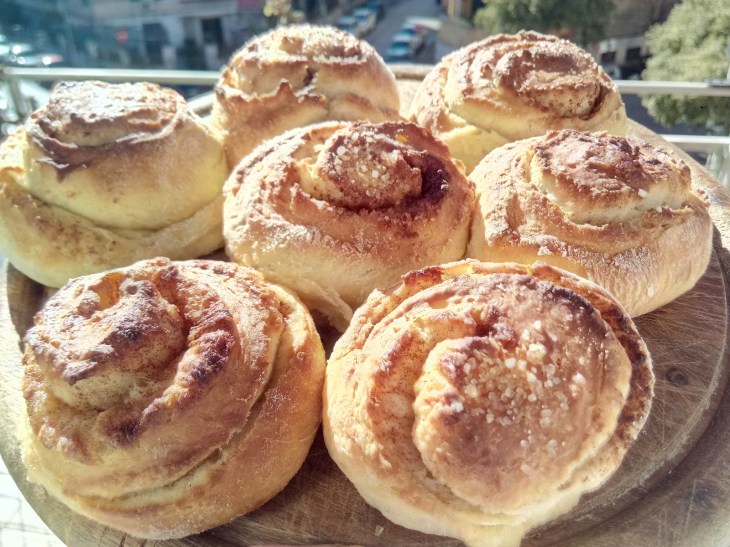 Coming from Accra, Rome at Easter was lovely also temperature-wise. I baked up a storm! Bread, bread rolls, and these Norwegian cinnamon buns. Skillingsboller are also known as “kanel i svingene”, cinnamon in the turns. This uses a basic sweet yeasted dough, which is very adaptable.

Warm the milk and butter in a small casserole, just enough for butter to melt. Let it cool to lukewarm, so you do not kill the yeast. Add flour, sugar, cardamom, salt, and knead it all together. Cover bowl and leave to rise in a sunny spot for an hour so until it doubles.

Knead again, and divide dough in two.  Roll each dough half out to a rough rectangle.  Spread the dough surface with soft butter, then sprinkle it  with sugar and cinnamon.  Roll the rectangle into a scroll away from you, rolling the long side nearest you. Tuck it in so you have a long roll. 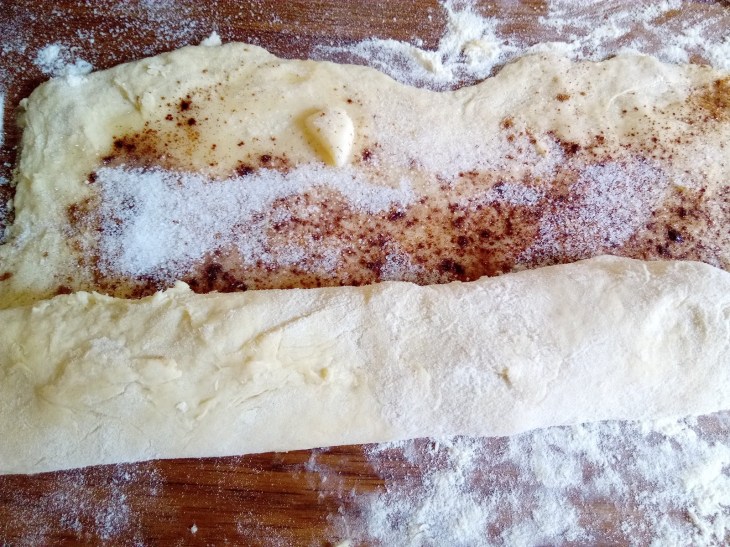 Slice the roll from the short end so you get little dough rolls. Stand them on a cut side, on baking parchment. Cover and leave to rest and rise, at least half an hour. They will rise and get puffier. 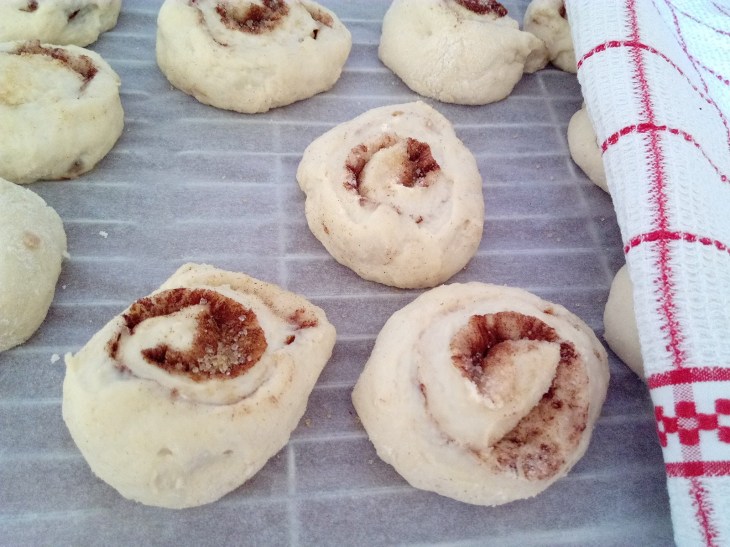 Bake at 240C for 10-12 minutes until golden. These were a little dry, but very nice tastewise. They freeze and microwave very well, good for neighbours dropping by. 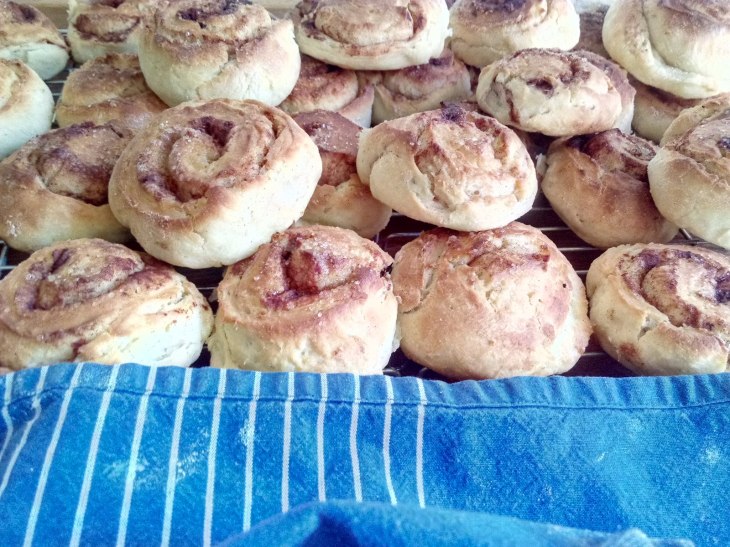 Note: This is adapted very lightly from “Gjærbakst på alle bord”, 1987. A classic! One of my first cookbooks when I left home for university. The original recipe calls for 50 grammes fresh yeast and much faster rises. Also, the recipe uses 180 grammes sugar in the dough, which I reduced. I should have used a bit more butter in the filling, but the dough itself was good. 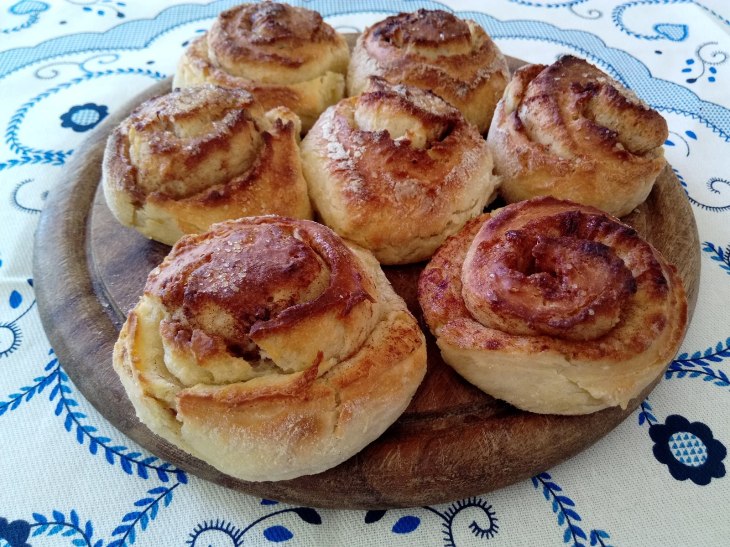 Stuff. And yeah. That

somewhere on the internet to hang my hat

Come see what I've been cooking!

Simply So Good
My Break from Britain
An Orcadian Abroad

A Scottish girl in search of the world.

a mother-daughter blog of home cookery

Every Meal Tells A Story

Artist inspired by my garden, the seasons and a smidgen of make-believe

The dawn breaks, dusk falls, and in the fleeting moments in between, life happens.